Here it is: An application for registration in the trade register. That’s how it reads printed in decorated letters. A lot of work has already been done; research, creation of a contact network, preparations. But “this is really just a beginning” ponders the young Leino Molander, holding the fresh memorandum of association in his hands; Dayton Waaka Osakyhtiö – Dayton Wåg Aktiebolag”.

That was in 1923. Finland had acquired its independence just six years ago. K.J. Ståhlberg, Finland’s first president, was still in office. Dayton Waaka’s first business premises were in the Jääkärinkatu street in Helsinki. Together with his two associates Leino Molander started managing the company, which imported scales of the Dayton brand. They were imported from USA where the company Dayton Scale Company operated in the state of Ohio.

Information sources also tell that in the 1930’ies the company co-operated with the civic organization “Mannerheimin Lastensuojeluliitto”. At that time slot machines were already numerous. Their use was not so strictly regulated as it is today. Dayton Vaaka Oy acquired, installed and served the slot machines, which provided an income for Mannerheimin Lastensuojeluliitto. In 1933 Dayton Vaaka donated all its slot machines to the organization, but the company still earned money from serving them. The same year the Dayton Scale Company in Ohio was acquired by IBM.

After many turns Dayton Vaaka moved to spacious and modern premises in Kilo in the city of Espoo. The year was 1956. The company had started manufacturing its own scales and scale bridges for retail and wholesale trade as well as for industry. The same year the Dayton Vaaka people were hit by chagrin when Leino Molander suddenly died. The women in the family took over the management. Leino’s daughter Marie-Louise became chief executive officer and his wife Else took over the accounting. The third generation was already growing. Jerker Molander was born only one year before his grandfather died.

Now Jerker says that he has acquired a solid basis for his life as the son of an entrepreneur family. One of his most important lessons is that “you shall never give in”. An entrepreneur must be humble in difficulties as well in moments of victory. Jerker also mentions entrepreneurs whom he considers as examples: Jaakko Pöyry, Mikael Wrede (Metro Auto) and Timo Puukilainen, the founder of Monilaite Oy.

After the depression in the beginning of the 1990’ies the company was in trouble. The management was getting old and new forces were necessary. The Dayton Vaaka staff had been reduced to only five persons. Jerker Molander started managing the family company in 1995. When I ask him how he did it he answers: “We got down to work. Expenses were scrutinized and financing was organized for the acquisition of the Kilo parcel. We worked a lot”.

The leap to get a strong hold of the family enterprise paid off. In 1998 Fred Ramberg bought a share of the company and started as chief executive officer. Jerker became chairman of the board of directors. Together this pair started the purposeful work of expanding the company. An organic growth alone was not sufficient, so in the year 2000 Dayton bought the company Monilaite Oy, which was a strong supplier of appliances and equipment particularly for the fast food sector. That’s how Monilaite-Dayton Oy was born. In 2005 Monilaite-Dayton Oy bought the retail business of Thomeko Oy and so Monilaite-Thomeko Oy was born. As a consequence of this transaction the company returned to its roots, i.e. supplier of appliances and equipment for the daily consumer goods sector. 1.7.2015 the company honored its history and changed its name back to Dayton Group. Today Dayton Group employs over 400 persons and its turnover in 2014 was 45 million euro. The company operates in Finland, Russia, Estonia, Latvia, Lithuania, Belarus and China. Dayton invests strongly in international operations. The company wants to be a reliable business partner for its clients in Finland, as well as on the international markets. 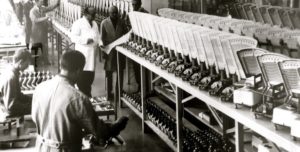